Background: Paris polyphylla is a member of the family of Melanthiaceae (earlier Trilliaceae or Liliaceae). It is known as love apple in English. This traditional herbaceous medicinal plant is found mostly in South East Asia.

Methods: The crude extracts (CE) of P. polyphylla (PP) collected from Rambrai (R), Meghalaya (Northeast India) were prepared by using 70% ethanol (E) and 70% methanol (M) solvents and named as PPR-ECE and PPR-MCE. The anti-proliferative effects of PPR-ECE and PPR-MCE were tested using the MTT assay. The apoptosis was examined by Annexin V-FITC/PI doublestaining assay.

Conclusion: The present study revealed that P. polyphylla collected from Meghalaya has an anti-proliferative capacity to inhibit the multiplication of the SAS cells. In comparison to PPRMCE extract, PPR-ECE was found to be more effective against SAS proliferation. Though the anticancer property of the herb is well documented, this investigation is the first report on the effects of P. polyphylla extracts against SAS oral cancer cells. 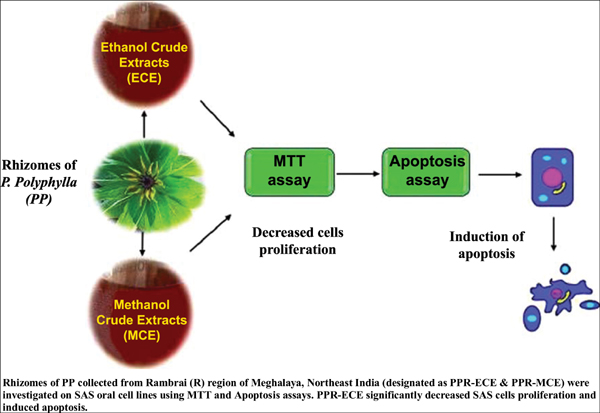